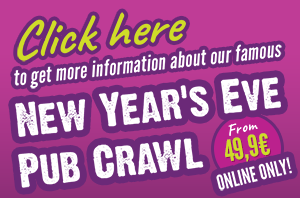 We compiled a nice list of questions and answers if you visit Pub Crawl Budapest to join our fabulous pub crawl!

Budapest is the capital of Hungary. It is in the middle-east part of Europe, right next to Austria.

The city is divided by the longest European river, so called Danube. Pest is on the east side Buda is on the west side.

It’s around two hours from Vienna by car.

Is Budapest a safe city?

Yes it is. You don’t have to worry about robbing, or terrorism.

The traffic is also civilized.

What language do Hungarians speak?

Hungarian. It is very unique language what is not similar to any other languages. Sounds like Finnish, and it is very hard to learn.

Are the Hungarians hungry?

…It is a very very very old and boring joke, and Hungarians really not appreciate it…keep it to yourself!

How is the food in Hungary?

Amazing! It is a bit spicy and there is red paprika in almost everything.

These are traditional Hungarian foods.

What alcohol can I get?

Everything! You can find almost any kind of brand from all over the world, but the Hungarian drinks are also very good.

The beer is tasty and cheap, the wines are world famous (try Rose Wine which is Hungarian speciality), the shots are strong!

Is it hard to purchase cigarette in Hungary?

Actually yes. You can buy cigarettes only in special tobacco shops, so called “Nemzeti Dohány Bolt”. Budapest is full packed with them, but after a while they are closed, so if you are in the middle of a party and you run out of smoke, you’ll might be in “trouble“.

What are the top 5 things to do in Budapest?

– Parliament:
There’s a 45-minute tour inside the Parliament that you can book in advance, although walking around the building itself is also something special.
– Ruin pubs and party places:
Budapest’s huge nightlife scene is widely renowned and it’s largely centered in the Jewish Quarter of District VII. The area’s top party places are all within easy walking distance from each other. It is easier to join our pub crawl, so you won’t miss anything. Check out https://pubcrawlbudapest.hu for example!
– Relax in a thermal bath
Budapest’s abundant underground thermal waters mean that there are dozens of thermal baths dotted throughout the city. Surrounded by the stunning architecture of the Széchenyi Bath feels like swimming in a beautiful palace.
– Explore the Danube:
Taking a boat ride is a great way to enjoy the beautiful panorama of Budapest and see all the bridges like the world famous Chain Bridge.
– Castle district:
You can’t miss the World Heritage-listed Royal Palace and Castle Hill. The palace is one of the city skyline’s most distinct features, with its huge green dome towering over the city.


Is it a good idea to make a stag / hen party in Budapest?

Yes it is! Foreigners love to spend their bachelor’s party in Budapest. If you want make sure to have an epic night, just let us organize yours. 😉

Where does a local youngster go to party in Budapest?

To the same area as the tourists. The Party District is a good idea to go to find the best clubs or bars.

Are there any good Hungarian beer brand?

There are a lot. They are usually cheap, but good quality light beers.
Just a few: Arany Ászok, Soproni, Borsodi, Dreher etc.
You can taste them in any bar in Hungary.

What kind of music do they play in a usual Hungarian club?

Nowadays hits are the most common, but you can accidentally find some retro, or Hungarian retro music in a few bar.

Are there any nightclubs / strip clubs in Budapest?

Yes there are some good ones. But you have to be careful, because it is easy to lost all your money you have. Some of the nightclubs may scam you, so we would recommend to visit a nightclub with an organised tour, like our Strip Club Tour.

Is it safe to walk alone in Budapest?

Yes. We can say with confidence, that Hungary is safe even at night. But of course as in every big city there are some bad people, but it is really not typical.

How much money do I need for a crazy night in Budapest?

If you want to enjoy yourself I would say, that at least 15000 Ft so around 48 Euro what you will need for a party.
But it is cheaper if you joint to our pub crawl for 15 Euro and buy a Power Hour (unlimited drinks) for another 15 Euro and you will see all the good places and surely you will have a blast!

Can I pay with Euro or just with Hungarian Forint?

In some bars you can pay with Euro, but we don’t recommend it, because the change fee is really expensive in a bar.
So it is much worth if you change in a money change. Budapest is full of them, so you can easily find one in the city center.

Can I pay by credit card?

Yes in shops. But in bars it is not common. We recommend to have a forint with yourself, when you go out to drink.

How much should I tip in bars & restaurants?

The general amount is 10% in bars, pubs, cafes and restaurants. However it depends on you if you give more or less. Some venues, usually high class places include a 10-15% service charge in their bill. This must be noted in the menu. In this case it is not expected to tip above this amount.

Of course hotels as much more comfortable, but if you are coming with your friends and you do not want to spend too much money, hostels can be a good solution. In Budapest you can find some really nice and fancy hostels in the city center.

You can use both of them in Budapest all day, 0-24. Taxis are more comfortable, of course, but much more expensive.

What is Goulash Soup?

Goulash is a soup or stew of meat and vegetables, seasoned with paprika and other spices. Originating from the medieval Kingdom of Hungary.

Pörkölt is a Hungarian stew with boneless meat, paprika, and some vegetables. It should not be confused with Goulash, a stew with more gravy or a soup (using meat with bones, paprika, caraway, vegetables and potato or different tiny dumplings or pasta simmered along with the meat), or Paprikás (using only meat, paprika and thick heavy sour cream). The traditional Hungarian stews: Pörkölt and Paprikás along with the traditional soup “Goulash” are considered to be the national dishes of Hungary.

How to say cheers in Hungarian?

How does the public transport work in Budapest?

You will easily get to any sight and attraction by travelling on one of the four metro lines or the major tram lines (No. 4, 6 and 2).
The bus and trolley bus service are quite extensive too. There’s also a scheduled boat service on the Danube from spring till autumn. A wide variety of trams, buses, trolleys and metro trains run in the city.Night service is quite reliable, too.
One ticket costs 350 HUF (around 1 EURO) which is valid for one ride.
Always valid your ticket on the tram or bus or if you use metro, before you go down to it.
Keep your ticket till the end of your journey!
Use google maps to get informations about the lines and routes. 😉

Which are the top 6 baths in Budapest?

How many people live in Hungary?

The population of Hungary is 9.818 million.

How many people live in Budapest?

The population of Budapest is 1.759 million.

Which is the strongest cocktail?

I am sure that there are stronger cocktail than Long Island Iced Tea, but it is definitely one of the most famous and strongest one.
Recipe: vodka, gin, rum, tequila, triple sec and a splash of coke. (There is no ice-tea in it!)

Is Hungary a member of the European Union?

Yes. Hungary is a member of the EU from 2003. We are int the Schengen zone, but we do not have EURO, but Hungarian Forint.

Is weed legal in Hungary?

Not at all!! The Hungarian laws stand very strictly against any kind of drugs. We not recommend to buy or use any of them!

Can I find Chinese restaurant in Budapest?

How do you say „pub“ in Hungarian?

Which is the biggest building in Budapest?

What is a bachelor party?

A bachelor party, also known as a stag party, stag night, stag do, stag weekend , or a buck’s night (in Australia) is a party held for a man shortly before he enters marriage, to celebrate his “last night of freedom.” A bachelor party is usually planned by the best man, occasionally with the assistance of a bachelor party planning company. The party is usually restricted to men only, but sometimes may feature female company such as strippers or topless waitresses.

How much alcohol is dangerous?

What is the origin of Gin and Tonic?

The quinine was drunk in tonic water, however the bitter taste was unpleasant. British officers in India in the early 19th century took to adding a mixture of water, sugar, lime and gin to the quinine in order to make the drink more palatable, thus gin and tonic was born.

Where are the best pubs, bars in Budapest?

Join to our pub crawl and you will see them. 🙂

Is it hard to find an ATM in Budapest?

Not at all. You can find an ATM at almost every corner.

What is the time in Budapest?

You can find the current time of Budapest here:
https://www.timeanddate.com/worldclock/hungary/budapest

How big is Hungary?

How big is Budapest?

Fröccs is like Spitzer. A spritzer is a tall, chilled drink, usually made with white or rose wine and carbonated water or sparkling mineral water.

What is the difference between Budapest and Bucharest?

What does it mean: „free drinks included“?

We go to 5 bars. In every each of them you get a free welcome shot. That means 5 free shots. If you want more you have to pay for it.

Which pub crawl should I choose?

Us of course! 🙂 🙂 We go to the most place, only our Power Hour contains longdrinks and our guides are super cute! Aaaand we are the first licensed pub crawl in Budapest.

What is the most popular religion in Hungary?

Religion in Hungary has been dominated by forms of Christianity for centuries.

How to say „Good morning!“ in Hungarian?

How to say „Good afternoon“ in Hungarian?

How to say „Good evening“ in Hungarian?

How to say „Thank you!“ in Hungarian?

How to say „You are welcome!“ in Hungarian?

How to say „Good bye!“ in Hungarian?

Which is the cheapest ruin bar in Budapest?

It is really hard to find out the cheapest ruin bar, but one of the cheapest is definitely Füge, where our pub crawl goes regularly.

Do you have some articles about Budapest? Where can I read more?

Check out our Budapest Tips articles! We have some cool information there!